Well, we’ve had a fantastic year at the Academy, and I’d like to take a moment to thank everyone for their support over the past 12 months.

2015 was a big year for Ilyokwan as we celebrated our 20th anniversary in September and had some notable successes through the year too:

In May our Chief Instructor Master Olpin was awarded a ‘Gold Award’ from Martial Arts Illustrated magazine and inducted into their prestigious Hall of Fame. Then,in July three of our top students to be recognised at the National Student Awards, including our two assistant instructors Mr Hirst and Mrs Williamson and our first ever Black Belt, Shona Thornhill. Mr Hirst was also recognised at the ‘Warriors Assemble – The Fighting Spirit Awards‘ awards in October for his outstanding dedication to the arts in spite of his brittle bones.   We’ve also seen three new Black Belt promotions too, Mr Knott and Mr Powell attaining their first degree and Mrs Williamson promoted to third degree black belt. 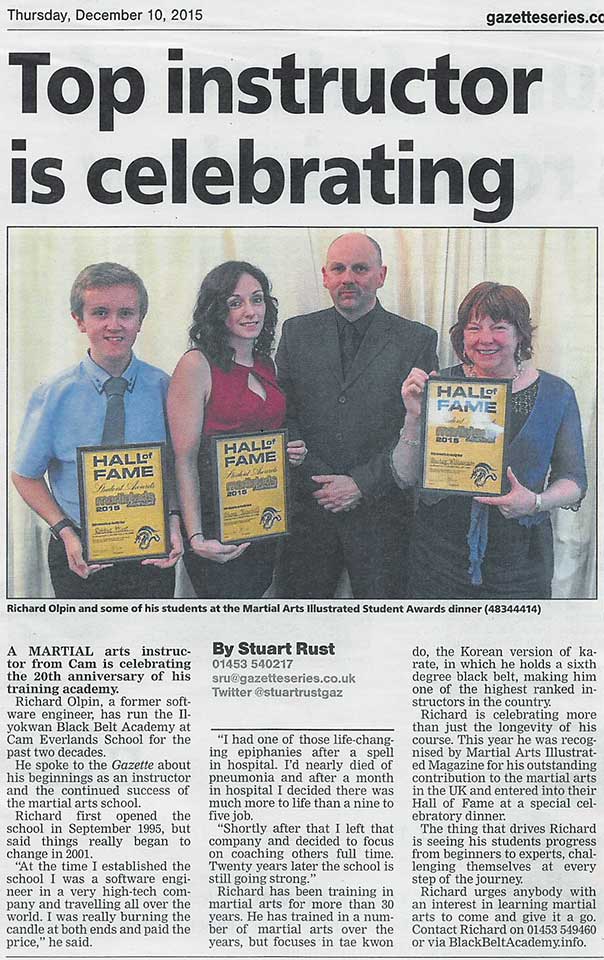 A great little article in the Gazette this week about Master Olpin celebrating the Academy’s 20th Anniversary here in Cam.

It’s a little late as the actual anniversary was back in September, but the paper only just picked up on it recently..

In the photo with Master Olpin you’ll see our two leadership team assistants, Robbie Hirst and Shirley Williamson who are undoubtably the two most loyal students we’ve ever had, along with Shona Thornhill who was Master Olpin’s first black belt graduate back in 2000..